We use a mobile flux tower (AU-Mel) in conjunction with the main flux tower (AU-Cum) to assess how heterogeneous surface characteristics within the critically endangered Cumberland Plain woodland affect the carbon, water and energy fluxes of dry sclerophyll forests. The flux tower is mounted on a custom-built trailer and the mast can be extended to a height of up to 35 m, making it the tallest mobile flux tower in the southern hemisphere. 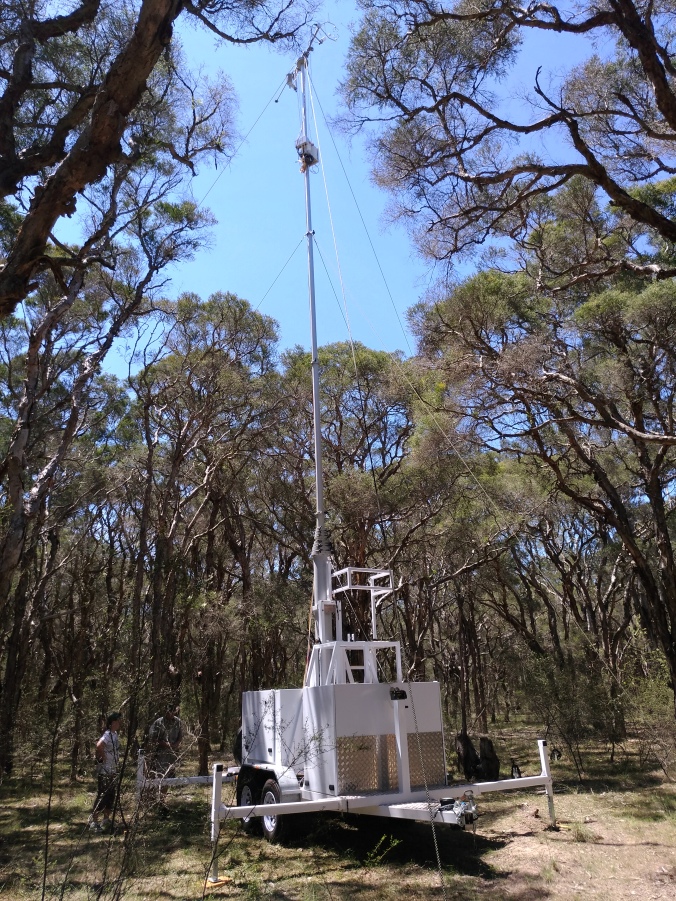 The mobile flux tower deployed within 300 m from the main flux tower in a Melaleuca dominated stand of the Cumberland Plain woodland.

The canopy of the Cumberland Plain woodland around the main flux tower is dominated by two Eucalyptus species (E. moluccana and E. fibrosa), and is surrounded by a relatively homogeneous patch of Melaleuca decora trees (they usually grow below the eucalypt canopy). Using this paired-tower approach, we found that melaleucas can substantially contribute to the Australian carbon budget, as they had comparable high rates of quantum yield and photosynthesis along with a similar water loss compared to the eucalypt-dominated stand. However, melaleucas were more vulnerable to pronounced heat or drought stress, as they were less efficient in conserving water.

A vertical transect through the Cumberland Plain woodland (top row) and associated 3D point clouds (middle row) outlining the approximate source areas of fluxes for the eucalypt-dominated stand (left; AU-Cum) and for the melaleuca-dominated stand (right; AU-Mel) generated from an airborne LiDAR flight in November 2015. The point clouds are colored according to canopy height, red color indicates eucalypt trees emerging through the melaleuca-dominated stratum (green shade). Photographs (bottom row) demonstrate the extensive shrub layer in the eucalypt stand in contrast to the sparse under-canopy vegetation in the melaleuca stand.

Find me on Research Gate